"Love, in all its many guises, speaks through cinnamon, to touch those hidden areas of the self that we have denied love access to," writes aromatherapist Valerie Ann Worwood in Aromatherapy For the Soul. She goes on to say the emotional benefits of cinnamon essential oil are to encourage invigoration, benevolence, strength, energy, confidence, motivation, and generosity. 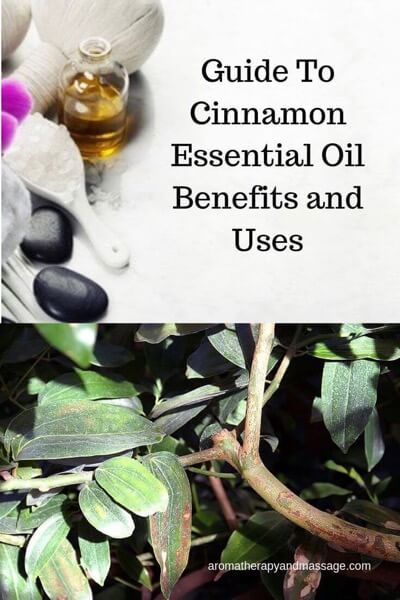 Cinnamon bark essential oil is strong and some aromatherapy sources recommend avoiding it in favor of the leaf oil. However, other sources recommend the bark oil as more effective. Keep in mind both the bark and leaf oils can sensitize and irritate skin, so you need to use them with care. Even a strong diffusion of cinnamon may irritate the mucous membranes of the nasal passages and eyes — for diffusion, blend cinnamon with a citrus essential oil to lower the risk of irritation.

Production: Steam distilled from the leaves or bark of the cinnamon tree.

Perfume/Aromatic note: Base to middle

Is cinnamon essential oil safe to use during pregnancy? No.

Is cinnamon essential oil safe for children? Some sources recommend not using cinnamon with children under age five.

Cinnamon bark oils may be adulterated with cinnamon leaf or cassia. Read labels: I saw a company on Amazon selling a product labeled as cinnamon bark, but when I read the details, I found it was actually Cinnamomum cassia. The two are not the same.

Aromatherapy for Health Professionals suggests avoiding cinnamon bark oil if you have a liver condition or alcoholism or when taking acetaminophen (the active ingredient in Tylenol). The reason for the suggestion is cinnamaldehyde may deplete glutathione, an antioxidant the liver uses to help break down toxins for removal from the body.

Aromatherapy: A Complete Guide to the Healing Art: The scent of cinnamon relieves tension, steadies nerves, invigorates the senses, and acts as an aphrodisiac. The oil may improve appetite and aid digestion.

Aromatherapy for Dummies: Cinnamon is a "mover and shaker" that is an emotional stimulant, physical stimulant, and aphrodisiac. The scent may help reduce depression, drowsiness, irritability, pain, digestive distress, and headache pain/frequency.

Essential Oils for Immunity by KG Stiles: During the winter months enjoy cinnamon leaf's warming and elevating scent in your aromatherapy diffuser. You can also diffuse the oil to relieve brain fog and the winter blahs. The warm fragrance makes this oil excellent for warming your mind and emotions and dispersing feelings of loneliness.

Aromatherapy Bible: Use cinnamon leaf in a diffuser to prevent colds and flu. Highly diluted in a massage oil, apply the blend to the abdomen to relieve digestive complaints. "Psychologically, cinnamon is fortifying and reviving... warming, invigorating, restorative, and uplifting... [The aroma] restores a zest for life and restores courage."

The Essential Guide to Aromatherapy and Vibrational Healing: Spiritually, cinnamon essential oil increases psychic awareness. Use the oil with the intention of increasing your intuitive skills. Mentally, this essential oil supports cognitive function and wakes you up. Emotionally, cinnamon increases your confidence and self-esteem.

Dilute in carrier oil. Adding this blend to 1/2 cup carrier oil will give you about a 1% dilution. For a stronger massage oil, use less carrier oil but make sure the resulting blend does not irritate your skin.

Massage into stiff or sore muscles daily to help promote feelings of relaxation and comfort.

Research has suggested that cinnamon may help control blood sugar. However, the effects resulted from using whole cinnamon or its extract, not cinnamon essential oil. Research from the USDA suggests using one-half teaspoon of cinnamon extract a day could dramatically improve blood sugar, cholesterol, LDL cholesterol, and triglycerides in people with type 2 diabetes.

As for the essential oil, the 2022 meta-analysis study, Antidiabetic Potential of Volatile Cinnamon Oil, found that cinnamon essential oil studies show the oil improves "fasting blood glucose, fasting insulin, and improvement in both anatomy and function of kidney and liver cells." However, many studies were on animals, and more research with humans is needed.