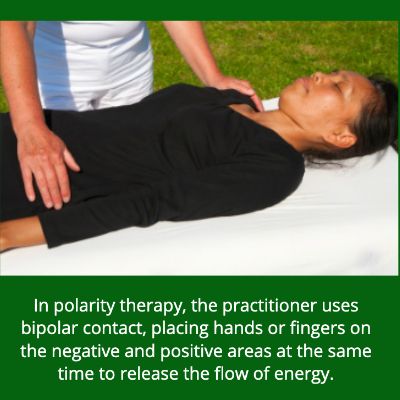 Polarity therapy (PT) is an energy technique used by a few massage therapists in their practices.

However, becoming a polarity practitioner doesn't require being a massage therapist. Chiropractors, physical therapists, and others can learn this energy therapy, which focuses on balancing the human energy field as the foundation of good health. Practitioners use techniques to free energy blockages in a person, promoting self-healing.

Humans are energetic beings with an inherent electrical nature that includes electrical activity in every cell, tissue, and organ system. Randolph Stone, an osteopath, chiropractor, and naturopath, based his development of PT on his worldwide studies of healing methods, along with Western manipulative techniques, naturopathy, Traditional Chinese Medicine, and Ayurveda.

Stone chose the word "polarity" to describe the nature of the body's electromagnetic energy fields. Energy flows horizontally and vertically in the body and also spirals from the top of the body downward and from the center outward. Stone called these three flows the triune function. He believed the outward flow or positive flow represents motor function while the return flow or negative pole is sensation.

The electrical flow of energy in the body is polarized (that is, the body has areas of positive and negative charges). The goal of PT practitioners is to connect the energy between each pole, helping reestablish the healthy flow of energy.

Stone found the following factors affect the human energy field: touch, diet, movement, sound, attitudes, relationships, and the environment. The core of PT is reconnecting with the sources of life energy within yourself and overcoming the human tendency to become fixated.

After more than 50 years of developing PT, Stone retired in 1974, and his students continued his work, setting up the American Polarity Therapy Association (APTA).

Practitioners learn how to work with body, mind, emotions, and spirit, while learning how to care for themselves first and clear their own energy fields.