What Is Somatic Education and Practice? 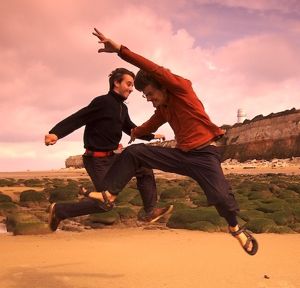 Somatic education sees every body pattern as an outward manifestation of your deeper mental and emotional condition. To create change, you become an active participant in the process by developing body awareness.

Various somatic practices take different approaches to creating awareness and change. These practices improve your natural control of your body’s muscular system, reduce stress, increase your energy, reduce or get rid of your chronic pain, and improve your physical performance.

This site has the following articles about somatic practices:

Alexander Technique is an educational process that teaches you how to change the habits you want to change, and how to use your body with more freedom and ease.

Eutony is a Western way of experiencing unity of the whole person.

Feldenkrais Method® is an educational system that helps you develop a functional awareness of yourself in the environment.

Hanna Somatics releases chronic pain patterns through the use of somatic exercises.

Sensory Awareness looks at the total functioning person and the development of a person’s responsiveness toward life.

While not strictly somatic, focusing is a psychotherapeutic technique that helps create change.

Highly recommended reading if you want a broad view of the field of somatics and bodywork: Bone, Breath, & Gesture: Practices of Embodiment contains writings by and interviews with pioneers in the field, including Charlotte Selver, F. M. Alexander, Moshe Feldenkrais, Ida Rolf, Thomas Hanna, and 12 other somatic innovators.

Movement is an important part of somatic therapy. Why movement? The Tao Te Ching says it best: "That which is static and unchanging is dead. That which moves and changes is alive." Life is continual movement. Even as we sleep, the movements of our internal organs keep us alive. But how aware are we of our bodies and their movements?

We judge our bodies as seen from the outside, as if we were viewing a statue or wax dummy. But we can also view the body from the inside. The body as seen and experienced from within is the soma, from the Greek meaning "living body."

Viewing the body from inside brings awareness to feelings, movements, and intentions, and is quite distinct from our society’s emphasis on the body as perceived from the outside.

Working with the soma is the basis of somatic practice. These practices are not about the development of muscle or some specified body shape. They are about internal awareness, the flow of breath in the body, releasing muscle tension, developing our own natural movement, and being healthy.

The following is adapted from "The Way of the Flesh: A Brief History of the Somatics Movement" by Don Hanlon Johnson, Noetic Sciences Review #29, Spring 1994, p. 26.

Their new vision of embodiment differed from the dominant models in biomedicine, physical education, religion, and classical ballet. For example, instead of training dancers and athletes to shape their bodies to fit a normative classical form, they encouraged individual expressiveness and a return to a more natural body, allowing forms of movement to emerge from within rather than imposing them—what somatics practitioners call "inhabiting" the body.

In the late 1800s, F. M. Alexander in Melbourne, Australia, and Leo Kofler in New York both experienced chronic laryngitis for which physicians could find no cause or cure. Conducting independent healing investigations, Alexander and Kofler both discovered that learning to fully inhabit their body movements, posture, and voice, healed the laryngitis. Similar experiences happened to Moshe Feldenkrais, Ida Rolf, Gerda Alexander, Ilsa Middendorf, and others who discovered healing capacities inherent in heightened bodily experience.

Because the innovators of somatic education worked mostly with non-verbal practices, few texts describe the early work, and much of the early knowledge has been lost. World War I broke up the early interdisciplinary somatics community. World War II further scattered the pioneers. Many had to put aside the more visionary aspects of their work and eke out a living as refugees, marketing their work under the more acceptable forms of physical rehabilitation or psychotherapy.

Then, in the 1960s, the Esalen Institute and a growing exploration of different states of consciousness provided an opportunity for a revival of the vision of somatics. By the end of the 1980s, international conferences on Somatic Education had been held in Paris, Zurich, Naples, Montevideo, Montreal, Strasbourg, San Francisco, and New York.