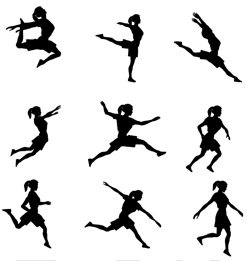 LLaban Movement Analysis provides a framework to understand, analyze, and describe both the structure and meaning of how humans move. Dancers, athletes, and physical and occupational therapists use this human movement analysis to analyze and improve movement abilities.

Rudolf Laban was a dancer and choreographer in the early 1900s who developed a system of dance notation called Labanotation and developed two of the four major components now taught as Laban Movement Analysis: Effort and Space.

Effort describes the quality of movement by identifying the type of energy used in the movement. For example, punching someone and reaching for a glass require extending the arm in the same basic way, but the intention of the movement is different. Effort looks at the subtle characteristics of a movement with respect to the intention of the mover. Effort is divided into four subcategories, each split into opposite qualities:

Laban also developed the concept of Space to describe the location, amount, and symmetry of the external space used during a movement. Looking at movement in relationship to the environment and to spatial patterns, pathways, and lines of spatial tension, Space pays attention to:

See Beyond Dance: Laban's Legacy of Movement Analysis for an introduction to Rudolf Laban's life and work and how his work has become a part of other fields, such as movement therapy, early childhood development, and communications.

Laban's student, Warren Lamb, developed the third major component of Laban Movement Analysis: Shape. The way the body changes shape during movement indicates the movement of the body’s internal components in supporting or influencing external activity. The subcategories of Shape are:

The fourth major component of Laban Movement Analysis, Body, describes the structural and physical characteristics of the human body while it moves. Body is the contribution of Laban's student Irmgard Bartenieff to Laban Movement Analysis and is also the basis for Bartenieff Fundamentals, a series of movement sequences that deal with mobilizing the body efficiently in its environment and preparing it to perform a wide range of movement qualities and shapes.

Bartenieff, who became a physiotherapist in the U.S., took Laban’s movement theory, applied it to how the human body functions, and developed a set of concepts, principles, and exercises, including:

Why study Bartenieff Fundamentals? To see how movement patterns do or don't help you in everyday life. To reclaim the role of movement patterns in the efficient functioning of your body. To reclaim the possibilities of total expressivity. To open new possibilities. To sense, feel, and attempt to understand what is fundamental in your own organism and what is fundamental to how you move and relate in the world.