What is the Alexander Technique?

The Alexander Technique is popular among athletes, dancers, musicians, and other performers because it can improve performance and relieve pain. This somatic technique can also help you in your daily life by teaching you: 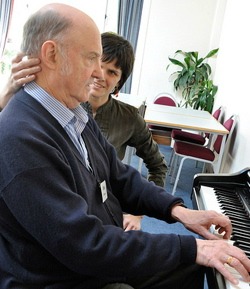 Most people have unconscious patterns (habits) of tension that interfere with how they function. The many consequences of these habits include poor posture, lack of energy, and neck, back, and shoulder pain.

By becoming aware of your unconscious patterns, you can choose to change the dysfunctional movements or postures that have become set in your muscles, thereby reducing or eliminating chronic tension or pain. You learn to use the appropriate amount of effort for a particular activity, improving your ease and freedom of movement, balance, support, and coordination.

This somatic practice is taught in private half-hour to hour lessons. The teacher works with you to observe and change mind/body habits that prevent your body from functioning optimally. The teacher uses both verbal and hands-on guidance to help you experience new ways of moving and coordinating your body. Rather than specific exercises, you learn a set of guiding thoughts to keep in mind during an activity.

Development of the Alexander Technique

Frederick Matthias Alexander was an Australian actor in the 1890s who often lost his voice on stage. When doctors couldn't solve Alexander’s problem, he began to study how he used his body.

Practicing in front of mirrors, he found that he pulled his head back and down, which caused him to breath forcefully through his mouth and compress his larynx. He experimented and found that moving his head forward and up alleviated this problem.

However, on stage he habitually returned to the old movement pattern, because it felt right. Alexander learned that instead of trying to do a movement he thought was right, it was far more effective to "inhibit" the old movement. Rather than focusing on the goal of what he wanted to do, he focused on the process. He substituted an "allowing" of the activity while thinking "head forward and up."

Alexander believed that poor habits or poor posture always involved rigidity in the head-neck area and unlocking this tension was the key to full freedom and use of the body. He taught people to eliminate the problem at its source by preventing the neck from contracting unnecessarily using their conscious minds to change their subconscious muscle patterns.

The basic premise of the technique is that when the neck doesn't overwork, the head can balance lightly at the top of the spine, leading to the basic Alexander instructions: "Let my neck be free, to let my head go forward and up, to let my torso lengthen and widen, to let my legs release away from my torso, and let my shoulders widen."

Teachers of the technique are trained to use subtle touch to prompt your body to follow these instructions. Training to become an Alexander Technique teacher takes three years (1600 hours).

Seven basic ideas form the core of teaching of the Alexander Technique: